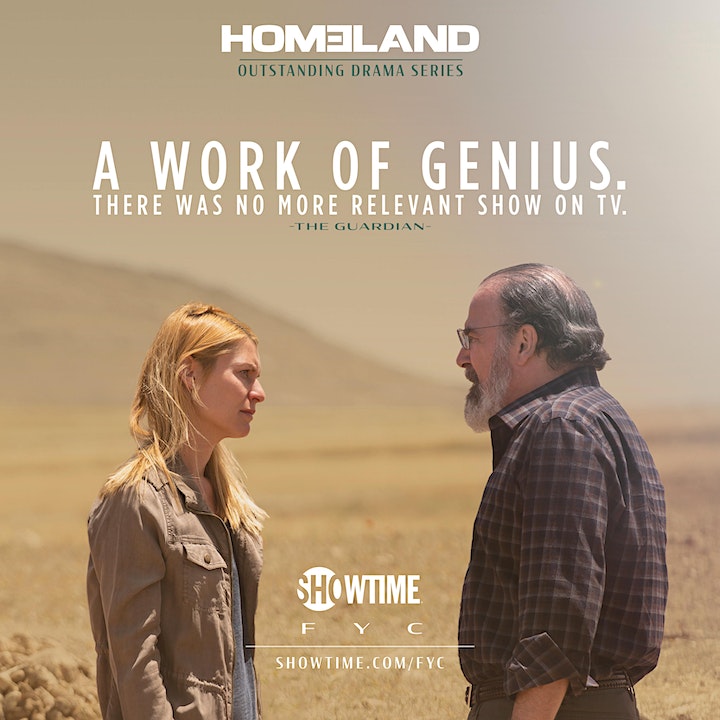 Carrie Mathison’s body is healing, but her memory remains fractured. While trying to broker peace with the Taliban in Afghanistan, Saul is dependent on his protégé’s expertise. Against medical advice, Saul asks Carrie to assist him one last time. TV-MA | 60min In his 1980 Broadway debut, Mandy Patinkin won a Tony® Award for his role as “Che” in Andrew Lloyd Webber’s Evita and was nominated in 1984 for his starring role as “George” in the Pulitzer Prize-winning musical Sunday In The Park With George. In 1991, he returned to Broadway in the Tony® Award-winning musical The Secret Garden and in 1997, played a sold-out engagement of his one-man show Mandy Patinkin In Concert, with all profits benefiting five charitable organizations. Patinkin’s other solo concerts, Dress Casual, Celebrating Sondheim, and Mamaloshen, have been presented on Broadway, off-Broadway, London’s West End, and in Australia. Patinkin debuted the new musical The Last Two People On Earth: An Apocalyptic Vaudeville, co-starring performance artist Taylor Mac with direction and choreography by Susan Stroman, at ART in Boston. Patinkin’s other stage credits include the world premiere of Compulsion, a new play by Rinne Groff, The Tempest, Enemy Of The People, The Wild Party, Falsettos, The Winter’s Tale, The Knife, Leave It To Beaver Is Dead, Rebel Women, Hamlet, Trelawney Of The ‘Wells’, The Shadow Box, The Split, Savages, and Henry IV, Part I. Feature film credits include: Wish I Was Here, The Wind Rises, Everyone’s Hero, Choking Man, Piñero, The Adventures of Elmo In Grouchland, Lulu On The Bridge, Men With Guns, The Princess Bride, Yentl (1984 Golden Globe® nomination), The House On Carroll Street, True Colors, Maxie, Ali & Nino, The Queen of Spain, Wonder, and can be heard as the voice of “Papa Smurf” in the animated feature Smurfs: The Lost Village. Patinkin starred for 8 seasons in the Emmy® and Golden Globe® Award-winning SHOWTIME® Original Series Homeland as the CIA’s “Saul Berenson”, for which he has been nominated for a Golden Globe and Emmy Awards. Patinkin won a 1995 Emmy® Award (as well as a Golden Globe® nomination) for his performance in the CBS series Chicago Hope and starred in the CBS series Criminal Minds as FBI profiler “Jason Gideon” and in the SHOWTIME® Original Series Dead Like Me as the reaper “Rube Sofer.” His other television appearances include the role of “Kenneth Duberstein” in the SHOWTIME® film Strange Justice; playing “Quasimodo” opposite Richard Harris in the TNT film presentation of The Hunchback; a film version of Arthur Miller’s Broken Glass for BBC/WGBH-Boston, and episodes of Three Rivers, The Larry Sanders Show (1996 Emmy® nomination), Law & Order, Boston Public, Touched By An Angel, and The Simpsons.

In 1989, Patinkin began his concert career at Joseph Papp’s Public Theater. This coincided with the release of his first solo album entitled Mandy Patinkin. Since then he has toured extensively, appearing to sold-out audiences across the United States, Canada, London, and Australia, performing songs from writers including Stephen Sondheim, Rodgers and Hammerstein, Irving Berlin, Randy Newman, Adam Guettel, and Harry Chapin, among others. In 1990, he released his second solo album entitled Mandy Patinkin In Concert: Dress Casual on CBS Records. His 1994 recording Experiment, on the Nonesuch label, features songs from nine decades of popular music from Irving Berlin to Alan Menken. Also recorded on the Nonesuch label are Oscar & Steve, Leonard Bernstein’s New York, Kidults, Mandy Patinkin Sings Sondheim, and his latest release Children and Art. In 1998, he debuted his most personal project Mamaloshen, a collection of traditional, classic, and contemporary songs sung entirely in Yiddish. The recording of Mamaloshen won the Deutschen Schallplattenpreis (Germany’s equivalent of the Grammy® Award). In October 2007, Patinkin debuted a new concert with dear friend Patti LuPone and they toured their show An Evening With Patti LuPone And Mandy Patinkin throughout the US, Australia, and New Zealand as well as a 9-week Broadway run at the Ethel Barrymore Theatre. Patinkin continues to collaborate with An Evening With Mandy Patinkin & Nathan Gunn, which played a two-week tour of Australia and New Zealand. In November 2019, he debuted his latest concert, Diaries, which he toured in 30 cities across America, finishing in February 2020.

Attendees will be emailed a Screening Link upon Registration and a Q&A YouTube Live Stream link on Monday, July 13, 10 minutes before Q&A start.