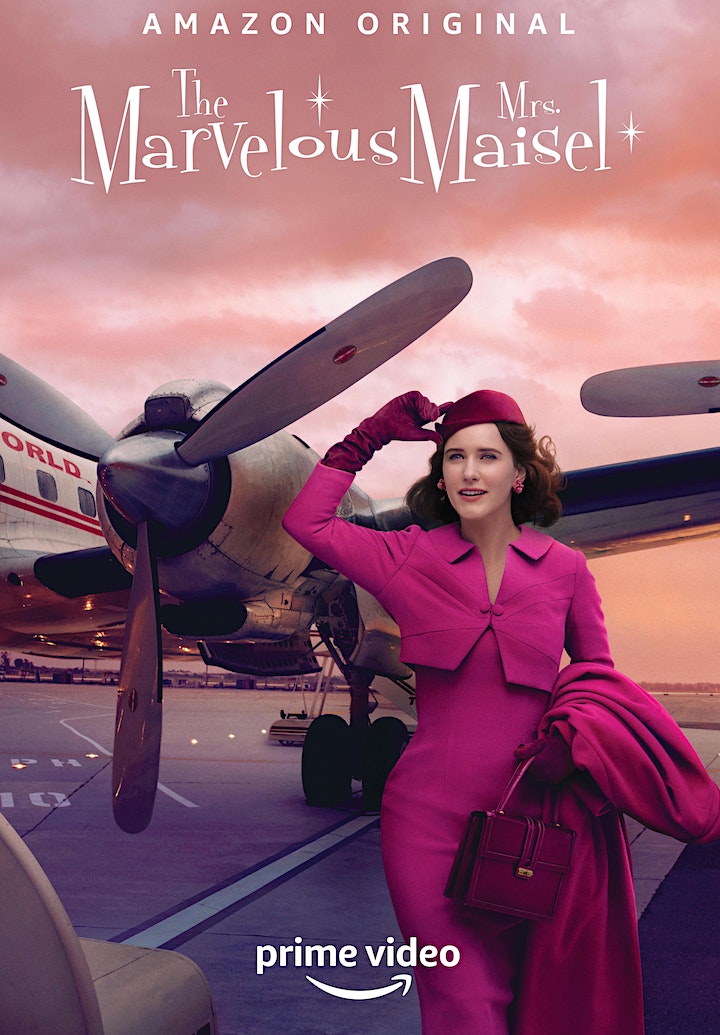 In season 3 of The Marvelous Mrs. Maisel, Midge and Susie discover that life on tour with Shy is glamorous but humbling (and they learn a lesson about show business they’ll never forget), Joel struggles to support Midge while pursuing his own dreams, Abe embraces a new mission and Rose learns she has talents of her own. TV-MA | 60min

Thomas Mizer is an award-winning writer whose work has appeared on stages and screens (of various sizes and shapes) around the country. As a lyricist and librettist, he was awarded the Fred Ebb Award, one of the highest honors for excellence in theater songwriting, and received a Jonathan Larson Grant from the American Theatre Wing – both for his musical collaborations with Curtis Moore. Their credits together include 5 original songs for the third season of the Emmy-winning series, The Marvelous Mrs. Maisel, including “One Less Angel” which is now nominated for a Primetime Emmy in the “Outstanding Original Music and Lyrics” category. Earlier this spring, they also recently reunited the show’s Silver Belles singing trio to remotely record a previously unreleased song entitled “Madly in Love” to spread awareness and raise funds for both The Actor’s Fund and Covenant House. They’ve received commissions from Lincoln Center and the Williamstown Theater Festival as well as residencies with the Eugene O’Neill Theater Center and the American Music Theatre Project at their alma mater, Northwestern University. Mizer and Moore’s romantic mystery Triangle premiered at TheatreWorks Silicon Valley, receiving six Theatre Bay Area Awards including “Outstanding World Premiere Musical,” and was named a Richard Rodgers Award Finalist by the American Academy of Arts and Letters. Both Mizer and Moore are members of The SCL and proud to be part of the intimate Hollywood composer community.

Thomas is currently working on four new pieces, including new musicals for Universal Theatrical Group and Grove/Whitman Commissions (producers of Fun Home and The Band’s Visit). In addition to his songwriting work, Thomas is an acclaimed copywriter for national media brands including Comedy Central, PBS, and Food Network. For more information go to www.thomasmizer.com.

Curtis Moore is an award-winning composer, songwriter, and musician in New York. He wrote five original songs for the Amazon Prime hit series The Marvelous Mrs. Maisel, and on Broadway, he composed the score for Nora Ephron’s play, Lucky Guy starring Tom Hanks. At the Public Theater, he composed the music for Venice with Matt Sax and Eric Rosen, as well as the score for Barry Edelstein’s Timon of Athens. With his longtime collaborator Thomas Mizer, he was awarded the Fred Ebb and Jonathan Larson awards. Their musical Triangle was commissioned by Williamstown and went on to win six Theatre Bay Area Awards and two SF Bay Area Critics Circle Awards for the Theatreworks Silicon Valley production. He teamed up with Amanda Green, Mizer, and Matthew Brookshire on the Fringe Festival hit, For The Love Of Tiffany, and is currently working on new musicals with Universal Theatrical Group and Grove/Whitman (producers of Fun Home and The Band’s Visit).

He conducted and performed the music in The Bridge Project’s critically acclaimed world tour of Richard III, directed by Sam Mendes, and composed the score for Othello and Hamlet at the Old Globe, and Curious Incident of the Dog in the Nightime at The Village Theater in Seattle. With Brookshire, he wrote and performed the music for Todd Solondz’s film Palindromes. Curtis, along with Thomas is nominated for a Primetime Emmy for “Outstanding Original Music and Lyrics” for “One Less Angel” in The Marvelous Mrs. Maisel. For more information go to www.trickybox.com.

Robin Urdang is a two-time Emmy winning, Grammy nominated, and Guild of Music Supervisor Award-winning music supervisor. She has worked on dozens of films and televisions shows, including The Marvelous Mrs. Maisel, Call Me By Your Name, Suspiria, Extremely Wicked, Shockingly Evil and Vile, A Bigger Splash, Beginners, and Younger.

Urdang is currently working on the HBO series We Are Who We Are, the Universal film Marry Me, an independent film, Nomadland, and John Patrick Shanley’s Wild Mountain Thyme. Robin has a Primetime Emmy nomination for Outstanding Music Supervision for The Marvelous Mrs. Maisel. She is very much looking forward to starting Season 4 of The Marvelous Mrs. Maisel and season 7 of Younger.

Attendees will be emailed a Screening Link upon Registration and a Q&A YouTube Live Stream link on Monday, August 17, 10 minutes before Q&A start.